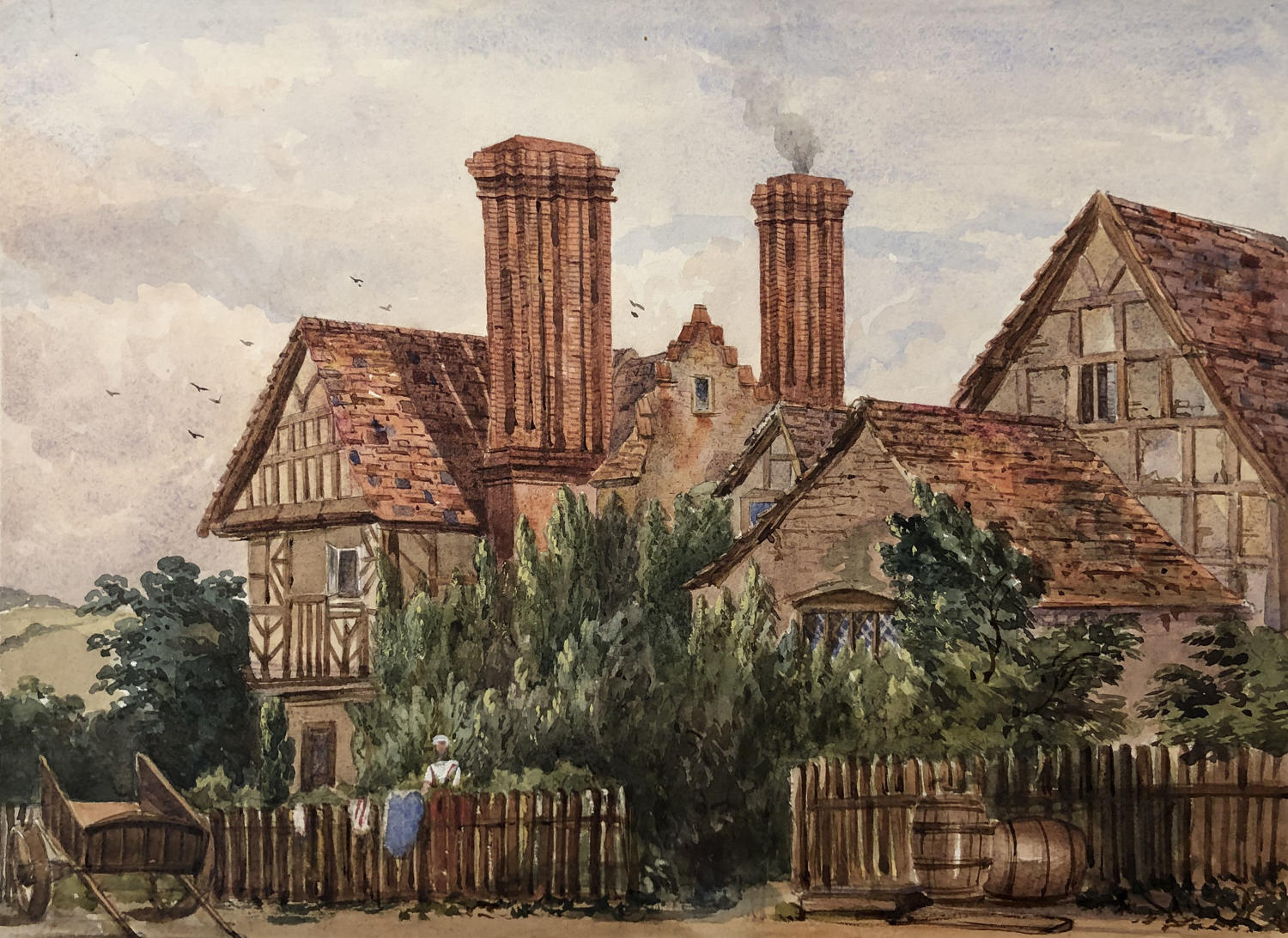 This watercolour is of the spectacular late 16th century farmhouse in the heart of the village of Boraston and was, in the year 1844, the home of the artist’s neighbour, a Mrs Goode. It was painted by the artist Harriet Rushout who lived nearby at Burford House in Tenbury Wells. The painting is inscribed to the reverse ‘Miss Goode’s House, Boraston’, HR and dated July 10th, 1844. Boraston is a small village and civil parish in Shropshire, around two miles from both Tenbury Wells and Burford with reference made to it in the Domesday Book. Of the seven listed dwellings in the village, one is Lower House Farmhouse. It is mentioned in the Parish Register Books of Shropshire (1558-1812): ‘‘The Lower House has black and white timber gables and a fine stack of red brick Jacobean chimnies…’ and it is described within its graded state as being late 16th century with extensions in the 17th and 19th centuries. It has a painted timber frame with painted brick and rendered infill on a stone plinth, brick cross wing with crow-stepped gable and brick extensions. Notably the large projecting eaves stacks with spurred brick shafts and 19th century caps. It was part of a larger manor house, part of which was destroyed by fire in the 19th century.
Now mounted and framed
Painted by Hon. Harriet Rushout, 1844
This picture came by descent from George Rushout-Bowles to his heir, Edward George Spencer-Churchill, whose estate at Northwick Park was dispersed in a series of Christies’ sales on the premises in 1964. It has since then been held in a private collection.

Burford House in Tenbury Wells, was a country seat of the Bowles family, the Burford estate being purchased in 1720 by William Bowles - the proprietor of the Vauxhall Glass Works in London, the largest in the country at the time - for £35,000. The house itself was completed in 1728. Hon. Rev. George Rushout, son of John and Rebecca, succeeded to the Burford estate on being bequeathed the property by his uncle, George, brother of Rebecca in 1817 and subsequently assumed the name Rushout-Bowles by Royal Licence. George married Lady Caroline Stewart and had six children, of whom three died prematurely. Of the others, Georgiana (1805 – 1891) lived at Burford House her entire life as did her younger sister Harriet (1809 – 1852). Their surviving brother, George, became the 3rd Baron Northwick in 1859, remaining at Burford House and carrying out extensive additions and alterations throughout the 1860s.