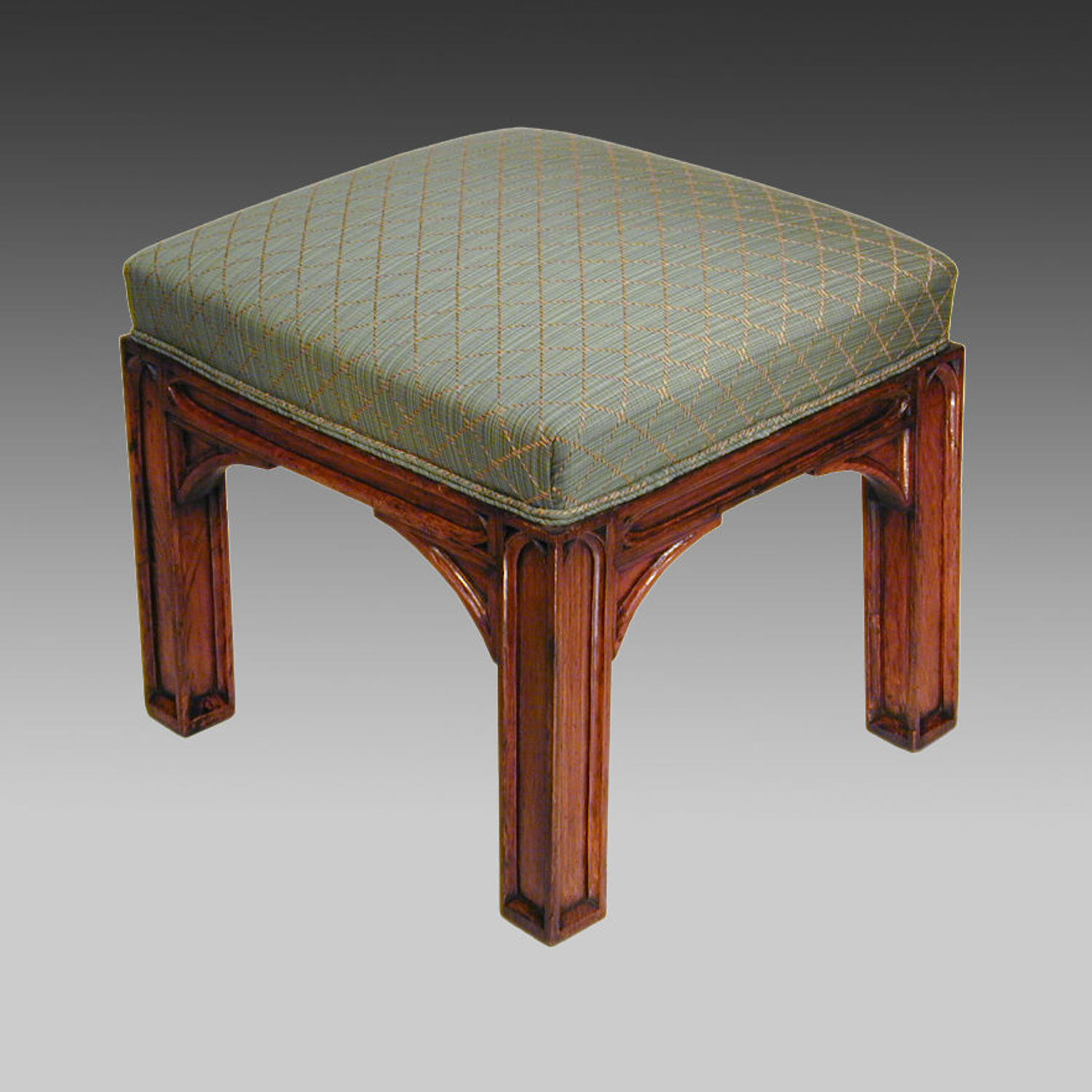 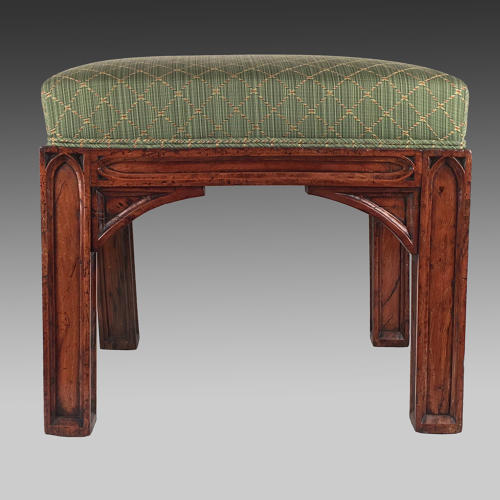 19th century gothic oak stool, after an original design by George Smith, which was originally published in 1807 by J. Taylor, London and subsequently included in Smith’s 1808 ‘A Collection of Designs for Household Furniture’. The upholstered top is over four gothic arched friezes and the legs, of square section, also have gothic arched moulded panels with matching spandrels.
English, circa 1810 – 1830

George Smith was described on the title page of this influential pattern book as an ‘upholder extraordinary to his Royal Highness the Prince of Wales’. Originally issued in three parts between 1805 and 1807, the collection was the first of designs for ordinary furniture in a fully developed Regency style. Later, Smith was to contribute designs for Ackermann’s periodical ‘Repository of Arts’ and he published his ‘A Collection of Ornamental Designs after the Antique’ in 1812. His trade card issued from his address in Princes Street, Cavendish Sq, between 1806 – 11, bears the Royal Arms and states he was ‘Upholder and cabinet maker to HRH The Prince of Wales, draughtsman in Architecture, Perspective and Ornaments’.

In his preliminary remarks to the collection, George Smith says:
‘I have great pleasure in declaring, that very extensive and liberal encouragement has of late been given to our Nobility and Gentry to various artists employed in manufacturing cabinet-work, the good effects of which will, I doubt not, soon be felt in bringing forward a supply of able workmen, and in promoting an increase of skill and taste in their several departments: for as the beauty of the Antique consists in the purity of design, and what was pleasing centuries ago continues to be equally so now; so I do not despair of seeing a style of Furniture produced in this country, which shall be equally agreeable centuries hence.’

It was Smith’s Gothic designs, which included the authentic cusped arches, crockets, trefoils and quatrefoils, that were ultimately to lead the way for the renewed and highly successful vogue in Gothic furniture design that came with A. C. Pugin’s publication of his ‘Gothic Lamp for a Hall’ in 1825. Smith was possibly influenced by the considerable interest shown in the Prince of Wales’s Gothic Conservatory at Carlton House, built in 1807, alongside Walsh Porter’s reworking of Craven Cottage with his spectacular Gothic Dining Room. Gothic designs in furniture were habitually modelled on the intricate decorations of both Gothic church interiors and exteriors.

What is clearly seen on this Gothic style stool is the reference to the cusped arch form that occurs as a motif on both the legs and the friezes. The design in Smith’s pattern book from which this stool is styled, is for a hall sofa and two hall chairs and Smith states that ‘oak is used with great propriety’ in these patterns. In his designs for parlour chairs, he also issued the instruction that they were also to be made of ‘brown oak, varnished’. Oak in such furniture is practical as well as being ideal in an aesthetic way, with the golden oak colour enhancing the austerity and strength of the Gothic design.