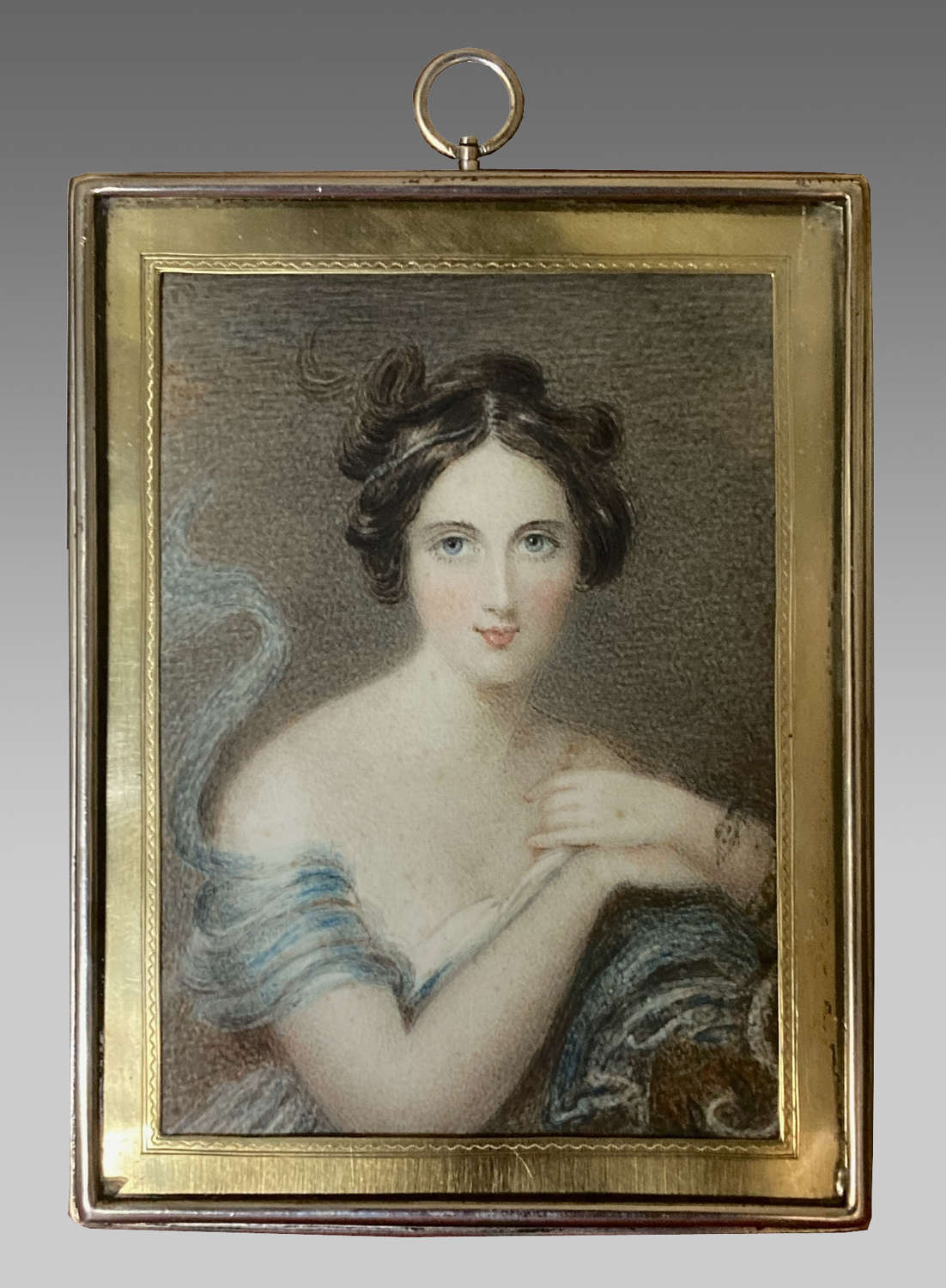 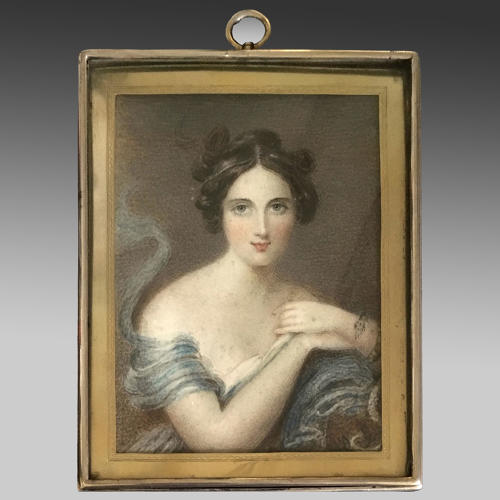 Early 19th century watercolour and gouache miniature - by Emma Kendrick. Possibly of The Hon. Anne Elizabeth Weld Forester, seated and leaning over the back of a chair in a blue décolleté dress, her wavy hair parted in the middle and loosely drawn back as was the fashion of the time. A gold bracelet in the form of a snake with ruby eyes adorns one arm and a floating blue, wrapped sleeve part-covers the other. Painted on ivory, the miniature is set in a parcel gilt and silvered, cased frame with bright-cut patterned edge to the gilt mount. Silvered ring for hanging upon upper edge. Inscribed to rear of case ‘By Emma Kendrick (1820)’. Emma Eleanora Kendrick (1788 - 1871) was appointed miniature painter to Princess Elizabeth of Hesse-Homburg and William lV in 1831.
English, circa 1820

Emma Eleanora Kendrick (1788 - 1871) was the daughter of the sculptor Josephus Kendrick (fl. 1813 - 1829), gold medal winner from the Royal Academy and frequent exhibitor there. He also designed two monumental tablets in St Paul’s Cathedral. Between the years 1810 and 1817, Emma won several prizes from the Society of Arts and exhibited regularly at the Society of Artists in Suffolk Street, London, between the years 1815 and 1820. With her increasing success as a miniaturist, she exhibited for the first time at the Royal Academy in 1811, and her success grew from there. With an already large practice and important reputation from painting portraits of royalty and eminent personalities, she was subsequently appointed as miniature painter to both Princess Elizabeth of Hesse-Homburg and William lV in 1831. She was also a member of the New Water-Colour Society and the Society of British Artists. In 1830, she published a book called ‘Conversations on the Art of Miniature Painting’, wherein she has several conversations with a fictional young woman by the name of Ellen. The book was dedicated to ‘the Misses Forester’, possibly The Hon. Anne Elizabeth Weld Forester, Countess of Chesterfield (1802 - 1885) and her sister, Isabella Elizabeth Annabella Weld Forester, the Hon Mrs George Anson (1805 - 1858), daughters of Baron Forester of Willey Park, both of whom were previous pupils of Kendrick and both of whom married in November 1830. We believe that this portrait miniature may be of Anne Elizabeth when she was 18 years of age.