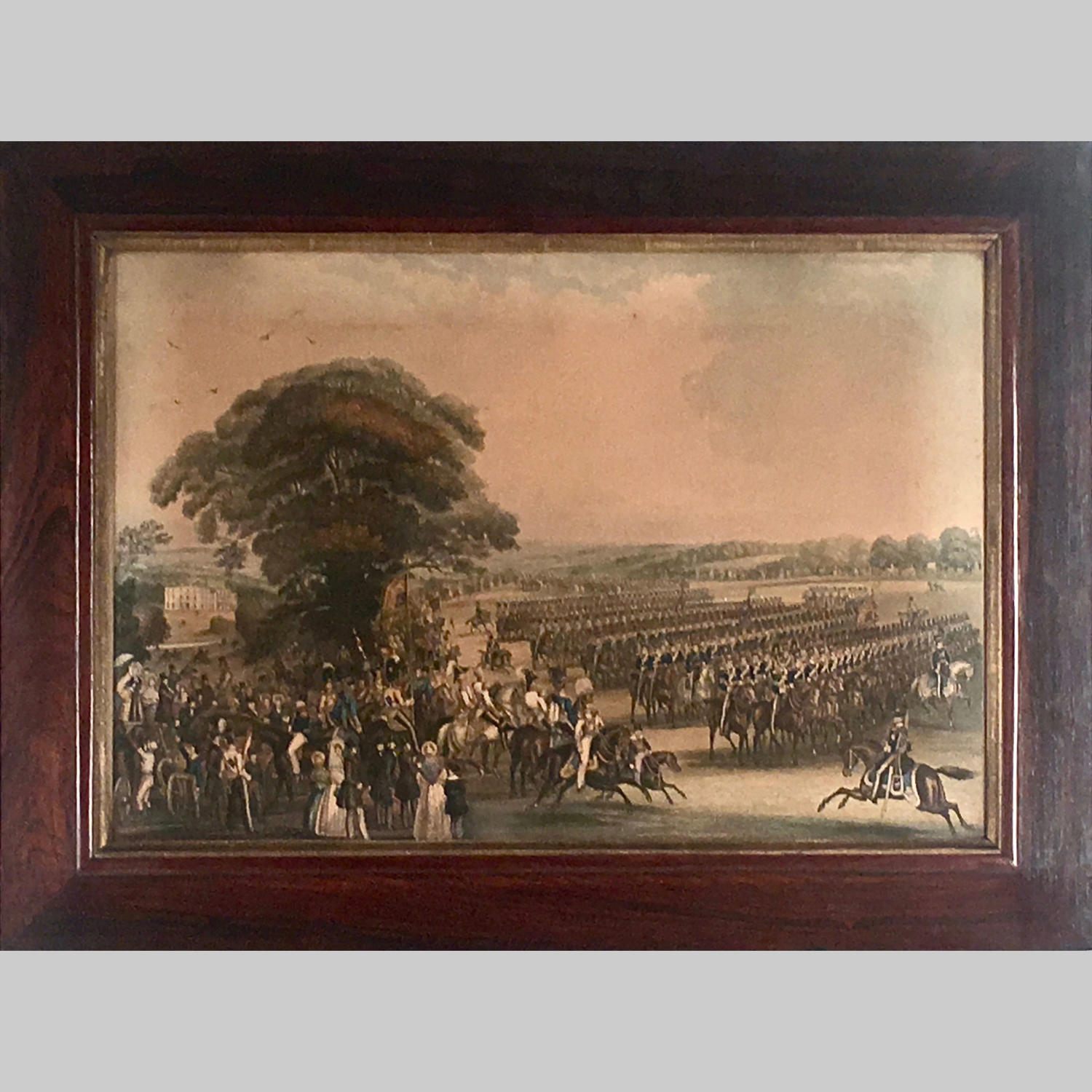 19th century aquatint, ‘The review at the Moat Park’. Inscribed ‘To Lieut. Col. The Earl of Winchelsea (of the east) & Lieut.Col. The Earl of Brecknock (of the west) & to the East and West Kent Regiments of Yeomanry Cavalry.  This Plate, representing the Review At the Moat Park, on Friday the 26th May 1837, is most respectfully dedicated by the publisher’. The coloured aquatint was drawn by G.B. Campion, engraved by Chas. Hunt and published by J.Smith, Maidstone and H.Ward, Canterbury, 1837.  In a contemporary rosewood frame with gilt slip. Labelled to the reverse.
English, circa 1837.

George William Finch-Hatton, 10th Earl of Winchelsea, 5th Earl of Nottingham (1791-18558) was an English politician known for duelling with the then Prime Minister, The Duke of Wellington. George Charles Pratt, Earl of Brecknock and 2nd Marquis of Camden (1799 - 1866) was also a highly respected politician.

George Bryan Campion was one of the earliest members of the New Society of Painters in Water Colours, having been elected in 1837, exhibiting there frequently.  He spent some time as drawing master at the Military Academy in Woolwich.  Charles Hunt (1803 - 1877), following in the footsteps of his father, George, was one of the most respected engravers of his time, with is work subjects including a variety of steeplechase, hunting and other sports/country activities.

‘Moat Park’, historically known as ‘Mote Park’, was, and still is, a 440 acre landscaped public park that had been converted from a country estate at the end of the 18th century.  The name, ‘mote’ or ‘moot’ is derived from the old English meaning a place of assembly and the Park has roots back to the 13th century.

A previous assembly of troops was in 1799, when King George 111 and the Prime Minister William Pitt visited the property to inspect around 3,000 troops of the Kent Volunteers, a local militia trained to defend the country from a possibly invasion by Napoleon 1 of France.  A Doric style temple was constructed at the time to commemorate the occasion.