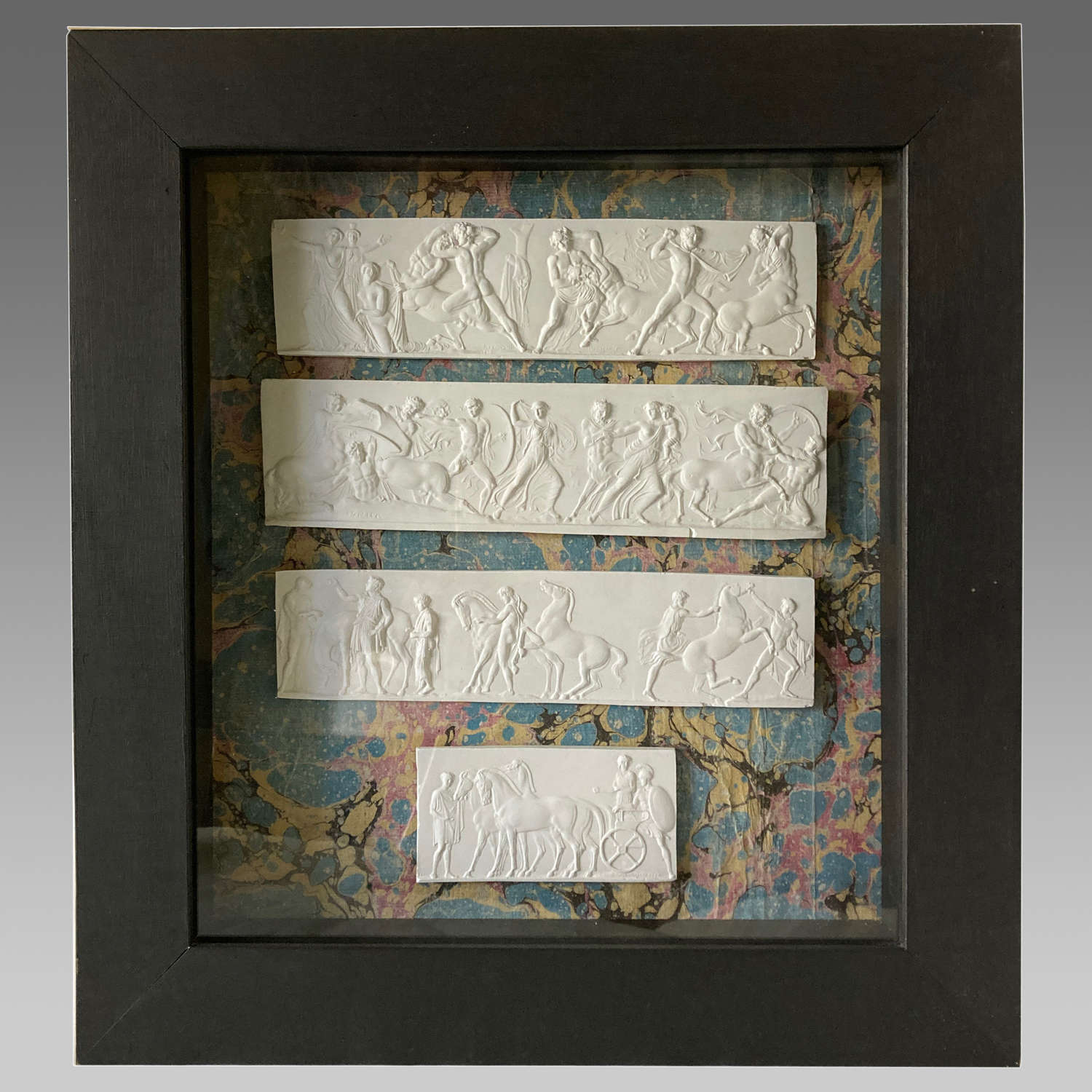 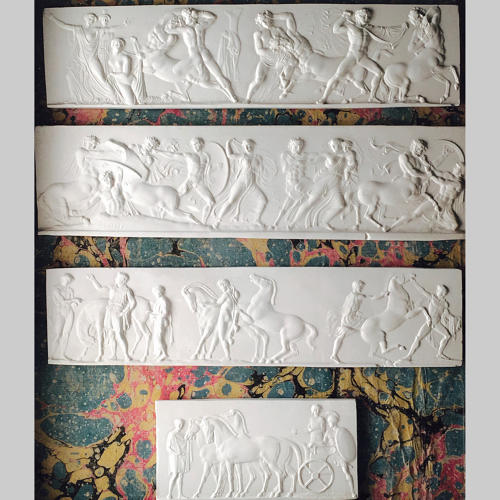 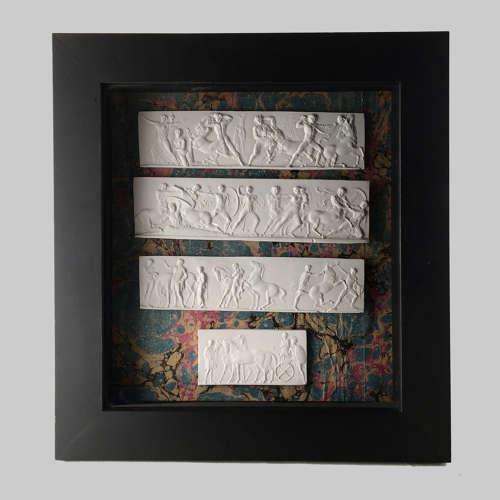 Four antique classical, cast plaster frieze reliefs.  In the manner of John Henning (1771 - 1851), who reproduced the friezes from the Parthenon and Bassae temples at a twentieth of their original size. The top two are from the west wall of the Bassae temple showing the Centauromachy, the battle between the centaurs and the Lapiths, and the bottom two showing horses, chariots and horsemen from the Parthenon. Two friezes bear the inscription Henning F. London, one dated 1820 and the other 1822. Now in a shadow box display case.
English, circa 1820 - 1840
Framed Height 16” (41cm) Width 14.5” (37cm)
Stock No. 1260
Price: £495.00

John Henning (1771 - 1851) was the son of a Paisley carpenter and architect, becoming recognised as a highly talented sculptor after creating cameos of his friends and family. He later received commissions from more notable personalities such as Sir Walter Scott, James Watt and Princess Charlotte, the daughter of King George lV. He was also championed by Josiah Wedgewood.

Henning saw the newly arrived Elgin Marbles in Burlington House in 1811 and persuaded Lord Elgin to allow him to copy them in order to make slate moulds for reproducing them. It took John Henning 12 years to reproduce his masterpieces - scale models of both the Parthenon and Bassae friezes at a twentieth of their original size. Although his inspiration was taken from the marbles themselves, it was notable on their completion that Henning had actually used the drawings of the antiquities completed by Jacques Carrey in 1674, 13 years before the Venetian siege of Athens during the Ottoman rule, which saw a shell irreparably destroy the Parthenon. He also referred to the drawings done by William Pars in 1765 and those done by Feodor Ivonwitsch, who was commissioned by Lord Elgin to draw them before the marbles were moved to England. Subsequently, they are stylised and represent complete reproductions of reliefs that had been originally and significantly damaged over time. One copy of the miniature Parthenon frieze was sold to William IV for £42 in 1821 but its location is not known.

The Parthenon has been considered the paragon of classical architecture, standing at the pinnacle of the Acropolis in Athens, designed by the artist Phidias and built by the Greeks between 447 and 438 BCE as a columned temple to Athena. Marble statues throughout portrayed the mortal and immortal greats and, at the centre, was a huge cult statue of the goddess Athena herself. Although there is controversy surrounding the true meaning of the Parthenon’s frieze, it is widely believed to be a representation of a Panathenaic procession, said to have occurred every 4 years in Classical times, and depicts the people of Athens in a parade to celebrate the goddess. Attracting controversy even back at the beginning of the 19th century, the friezes were purchased by the British government in 1816 and handed over to the British Museum for permanent display.

The Bassae Frieze was discovered in 1811 in the Temple of Apollo Epikourios  (Apollo the Helper) at Bassae and bought at auction by the British Museum in 1815. It was apparently designed by Iktinos, one of the architects of the Parthenon, according to the Greek historian Pausanias, and built around 420 - 400 BCE on a ridge of Mount Kotylion in south-west Arcadia, a region of the Greek Peloponnese. The blocks that ran around the interior of the building show the battles between the Greeks and Amazons and the Lapiths and Centaurs.