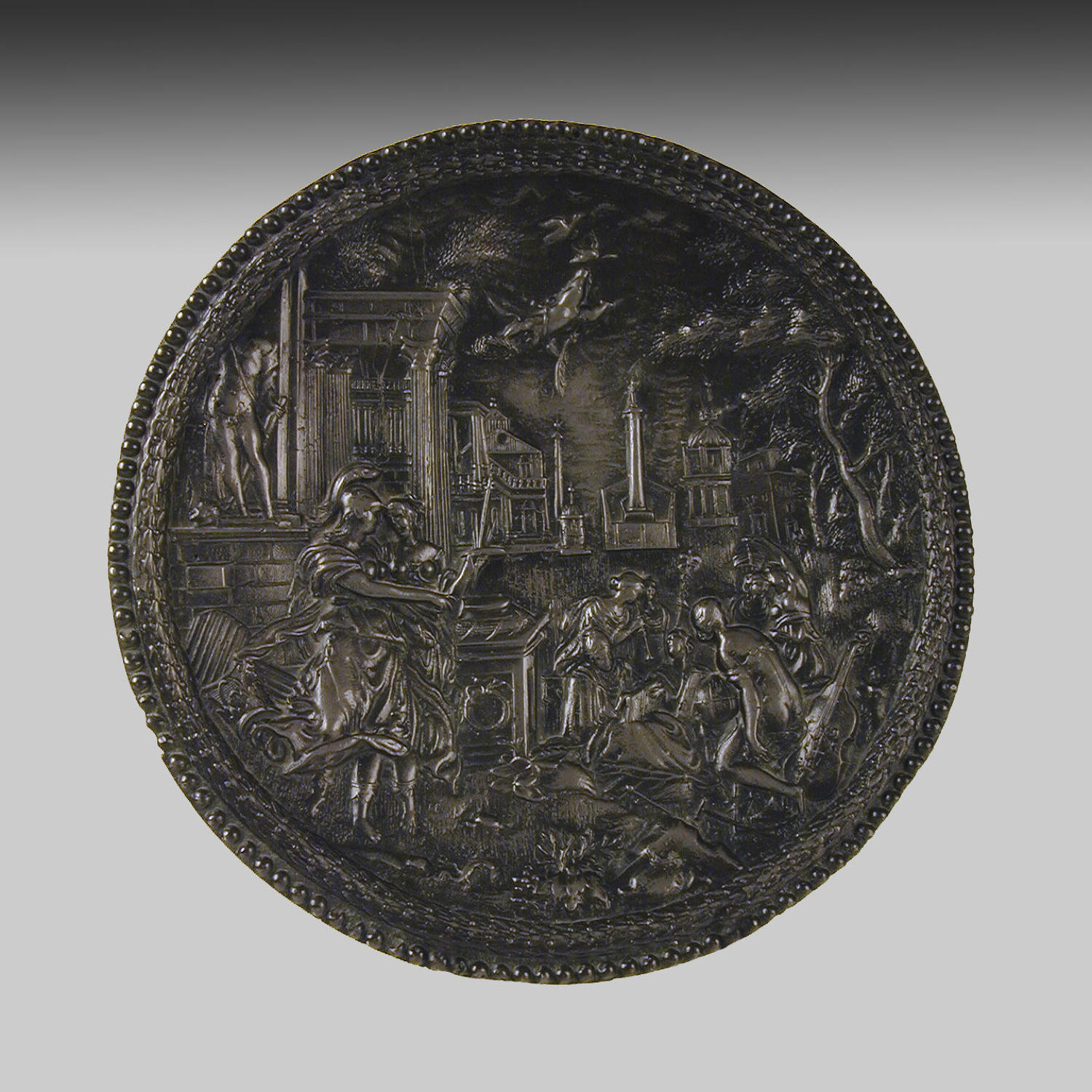 Renaissance cast lead relief plaque in the Neo-Classical Style, ‘Minerva Presents the Personification of Painting to the Circle of Arts and Sciences - The Seven Liberal Arts. In the style of the workshop of Hans Jakob Bayr (1574 – 1628), Augsburg, Germany, a master silver and goldsmith. The lead relief within a border of fine palmettes and beading. An extremely fine and contemporary casting with a good, natural, dark patina. Several roundels from the same workshop can be found in the Rijksmuseum in Amsterdam. The original plaque circa 1600.
German, circa 17th century.

Minerva (Athena) is the Goddess of poetry, medicine, wisdom, commerce, weaving, crafts and magic and is also known as the inventor of music. As such, she is frequently presented in art alongside the allegorical figures of ‘the arts and sciences’ and, in this instance, is introducing ‘Painting’ and, possibly, ‘Sculpture’, to the Seven Liberal Arts, personified by the female figures in the picture. They are Grammar, Rhetoric, Logic, Arithmetic, Geometry, Music and Astronomy - their tools, books and instruments around them. The relief represents the ideology that painting and sculpture were worthy to be included into the realm of higher learning. One of the ‘arts’ holds the Caduceus, held by Mercury (Hermes) in Greek mythology, a staff entwined by two serpents and surmounted by wings. In relation to Mercury, the messenger of the gods, it is associated with writing and eloquence and represents peace. Another figure carries a globe and one plays a shawm.

The landscape is set with baroque Italianate buildings and classical ruins and depicts other symbols relevant to classical mythology, such as the lizard – representative of divine wisdom and good fortune, especially when associated with Hermes – and the winged ‘putto’ – an allegorical figure associated with Eros/Cupid as well as Erato, the muse of lyric poetry.

The Liberal Arts was the expression used to denote an education that was worthy of a ‘free’ person (liberalis: latin – appropriate for free men, girls and boys alike), especially during the Roman Empire. In the 5th century, Martianus Capella defined the seven elements of the Liberal Arts. It was the neo-classicism of the Renaissance period that saw the reintroduction of classical influences in art, subsequently the use of mythological characters and classical buildings and artefacts. The cognoscenti of the renaissance reasoned that they could restore the arts and letters to their former glory by emulating them in their art and buildings.